The JU88 was a Luftwaffe multi-role aircraft, commonly used as a bomber, that had been shot down somewhere over the UK, and was put on display at various locations around the country. The aim was to encourage the population to do the patriotic thing and contribute to the National War Savings drive, by purchasing Government Savings Bonds and Certificates, as part of War Weapons Week. Members of the public, including King’s School pupils, could climb into the plane for a closer look, once they had made their 15 shilling purchase!

Norman Andrews remembers just how small and cramped the interior was. Willie Whybray recalls not having enough money to get inside, but peering into the cockpit, and seeing a red button, which he translated as ‘button to press in case of fire’.

The building behind the bomber with two skylights was the Physics Lab. The hut on the far side of the field, to the right of the aircraft tail, was the Woodwork department. It was a long corrugated-iron building stretching nearly across to Park Road. The Park Road end of it was the gymnasium, which was big enough for two sides to play shinty, a sort of indoor hockey. Note that the boys were wearing short trousers; long trousers were not allowed in the Junior School.

Older boys were recruited to work, in their free time, in the old Woodwork/Metalwork room at the bottom of the School Field. We were helping the war effort by using the metalwork lathe to rough-turn castings for one of the local firms.

Apart from the dramatic change in staff, particularly the loss of Headmaster H R Hornsby who was replaced by the Senior Physics teacher W F F Shearcroft, the war’s effect on us was considerable.

At the start of the war King’s was used as a reception centre for evacuees. Several of us older boys were recruited to assist as helpers. On Sunday 3 September 1939 we all sat in the Headmaster’s Study and listened to the Prime Minister, Neville Chamberlain, tell us on the radio that ‘this country is at war with Germany’.

Our uniforms were discarded and almost anything was allowed – but school caps remained. I was reprimanded by the famous Mr ‘Robbie’ Robinson for wearing a rather ‘loud’ sports-jacket, and told that I should not come to school looking like a peacock!

We soon became involved in digging air-raid trenches around the school playing field, and ‘Digging for Victory’ on the Park Crescent playing field (now part of the Regional College.), under the eagle eye of ‘Shiny Joe’ Carruthers, the rugger-mad History teacher. In those days we had Saturday morning school and at Assembly in the Winter term, Joe Carruthers would announce ‘I assume that you all wish to play rugger this afternoon, so I have made the teams ready for the matches.’

On the subject of Physical Education, I should explain that in a far corner of the playing field was the gym, at one end of the prefab huts (ex-WW1), with the Art and Woodwork room at the other end. In the middle was the Metalwork workshop, presided over by a famous member of the Home Guard, one Billy Beaver, who was their armourer and who took his job seriously, permanently wearing a pistol at his belt. The changing-rooms were based in the Quad and for PT we were expected to wear nothing but a pair of gym shoes and black cotton shorts. Dressed this way, we had to run from the changing room to the gym in all weathers. Surprisingly, many of us have managed to survive into old age! They brought ‘em up tough in those days!

Then there was the school platoon of the Army Cadet Force in which I reached the dizzy heights of Lance Corporal! We were very good at marching up and down in civic parades in the town and being inspected by elderly retired colonels, who told us we were the bedrock bottom of the British Army! I ended up joining the Navy!

Apart from numerous air raid warnings, nights spent in shelters, fire-watching on the Tower roof, and rationing, we carried on like everyone else.

I was a member of the Junior Observer Corps. We learned the silhouettes of all German aircraft. When there was an air raid, which in Peterborough usually meant planes passing over on their way back from bombing Coventry or Birmingham, some of us were allowed to stay up after bedtime with Mr Jermy and observe which planes went over. I don’t know to whom Mr Jermy passed this information, or why it was necessary for boys to learn it. Peterborough was surrounded by anti-aircraft guns with searchlights, so presumably the gunners had much better information than we could provide.

I particularly remember the night Coventry was bombed and that was one of the times I actually felt scared, hearing the throb of the German engines overhead, wondering if we were next on their list. Luckily, they only managed to bomb Peterborough Swimming Pool and blow a foreman out of bed with his girlfriend in St. Mark’s St!

There was also the day a German bomber flew down Park Road, causing us all to take cover in the sand-bagged corridor that led to ‘Big School’, today’s Library. 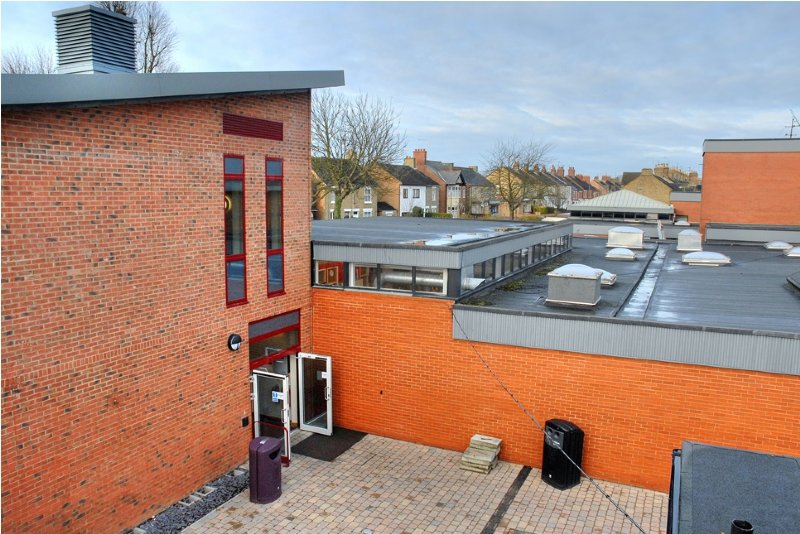 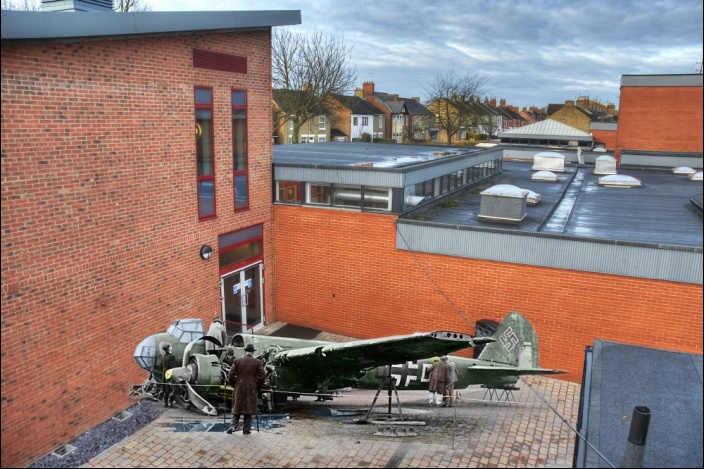 Former student and now teacher at KSP, Chris Dunn, has taken a current photo of the School and superimposed the JU88 over the top so that we can picture where the plane would have been in relation to the layout of the School Buildings of today

To find out further information on Junkers on line – see http://en.wikipedia.org/wiki/Ju88

With grateful thanks to the following former students for sharing their memories and recollections: