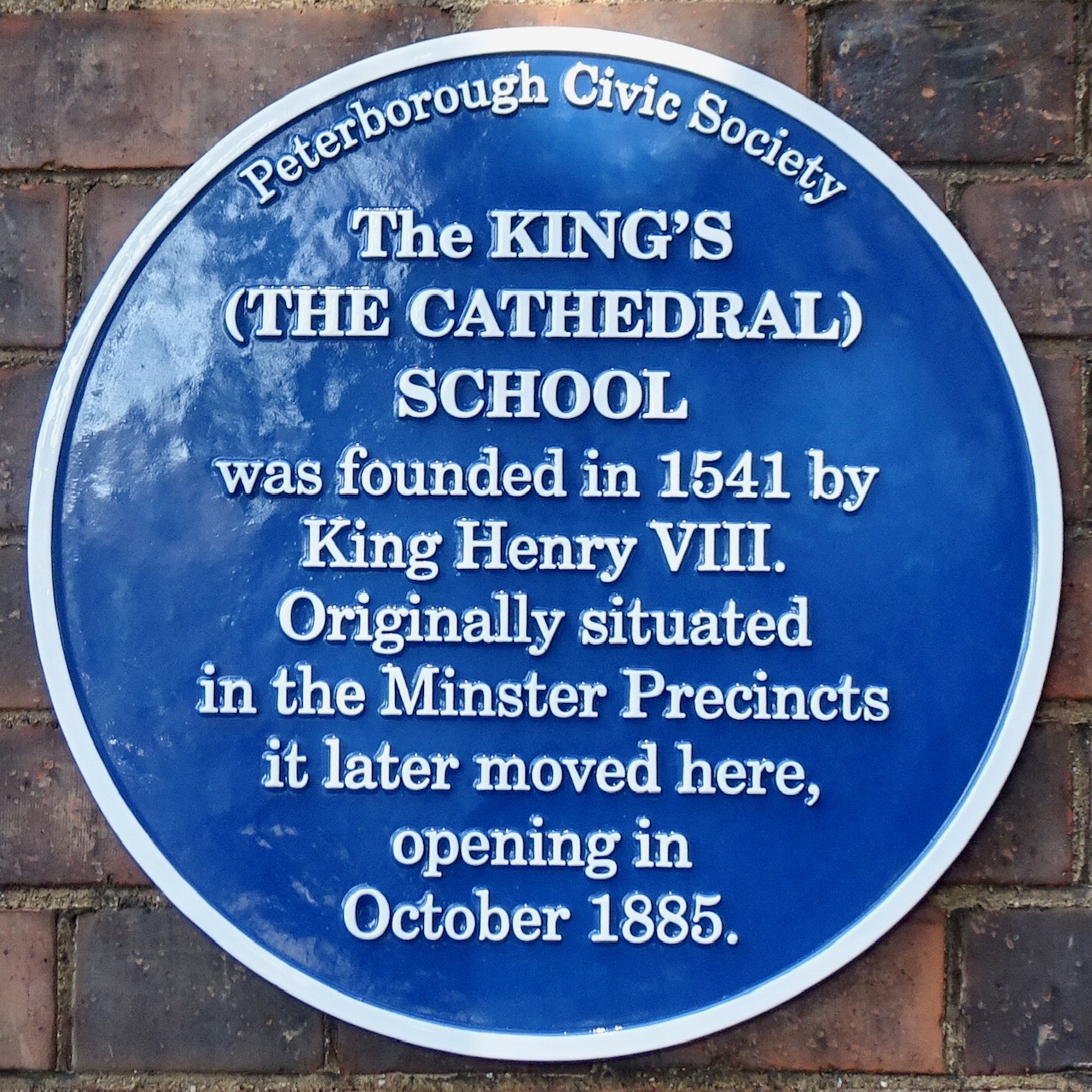 This plaque is located on the wall of The King’s (The Cathedral) School, facing Park Road.

A school did exist in Peterborough before 1541 in Deadmanslane, but little is known of it as many of the Cathedral records have subsequently been lost. So, our current knowledge goes back to when the Benedictine Abbey of Peterborough was dissolved by King Henry VIII, and its church became today’s Peterborough Cathedral, with the last Abbot, John Chambers, becoming the first Bishop of Peterborough. The School was set up as part of that Cathedral foundation in 1541. The Headmaster was paid £16-3s-4d, his Deputy £8 per annum. School began at 5.00am, with prayers in the Cathedral at 6.30am. As part of the wider Chapter, the Headteacher still has his own stall in the Choir today. For most of its life, 1541-1885, the School was situated in its own building in the Cathedral Precincts, today known as the Becket Chapel. The curriculum consisted largely of Latin, Greek and Scripture. In recent years this building has been used as a Cathedral Choir Song School and a visitors’ café, and today contains a plaque to the foundation of the School, as well as the seats used by the Headmaster, the Usher (Second Master) and the boys. The name The King’s School was first used in 1725.

By 1872 the School had 67 pupils and was outgrowing its cramped premises. The Governors moved to purchase land for a new school, initially in Thorpe Road. A fatal accident at the railway crossing caused a change of heart, and the current site was purchased instead on Park Road, which the Peterborough Land Company was in the process of developing. The School was built by John Thompson, the local builder and former pupil; it moved in on 13 October 1885.

During the Second World War several staff, including the Headmaster, joined the Forces; others were heavily involved in the Home Guard (which used the School facilities for meetings and training), fire-watching and Digging for Victory, on the land then owned in Park Crescent. Female staff joined for the first time and served throughout the War. The staff and the 288 pupils dug trenches on the School Field and at one point a downed German Junkers 88 bomber was exhibited to raise funds for ‘Weapons Week’.

Through most of its history, the School was one of two fee-paying boys’ grammar schools in the City, the Peterborough Cathedral Grammar School, with a Junior Department for primary-age pupils and a Boarding House. For a time, it also housed a privately-run Kindergarten. Following the 1944 Education Act, the Governors opted to become a voluntary-aided state school, and so had to give up its Junior Department in 1947, to concentrate on 11-18 grammar-school education for boys. Both fees and scholarships came to an end. This continued until 1976 when the School joined Cambridgeshire’s plan for Comprehensive Education, becoming a co-educational Church of England Comprehensive school.

The School, with currently just over 1,200 pupils, retains very strong links with the Dean and Chapter of Peterborough Cathedral with several members serving as Governors. The School educates all the Cathedral choristers, both boys and girls, in its Junior Department, re-opened in 2011 for this purpose. The School enjoys regular services and a Speech Day and Prize-giving at the Cathedral.

Today’s School continues to achieve very high academic standards based on a broad view of a modern education, with a wide range of extra-curricular visits and activities. 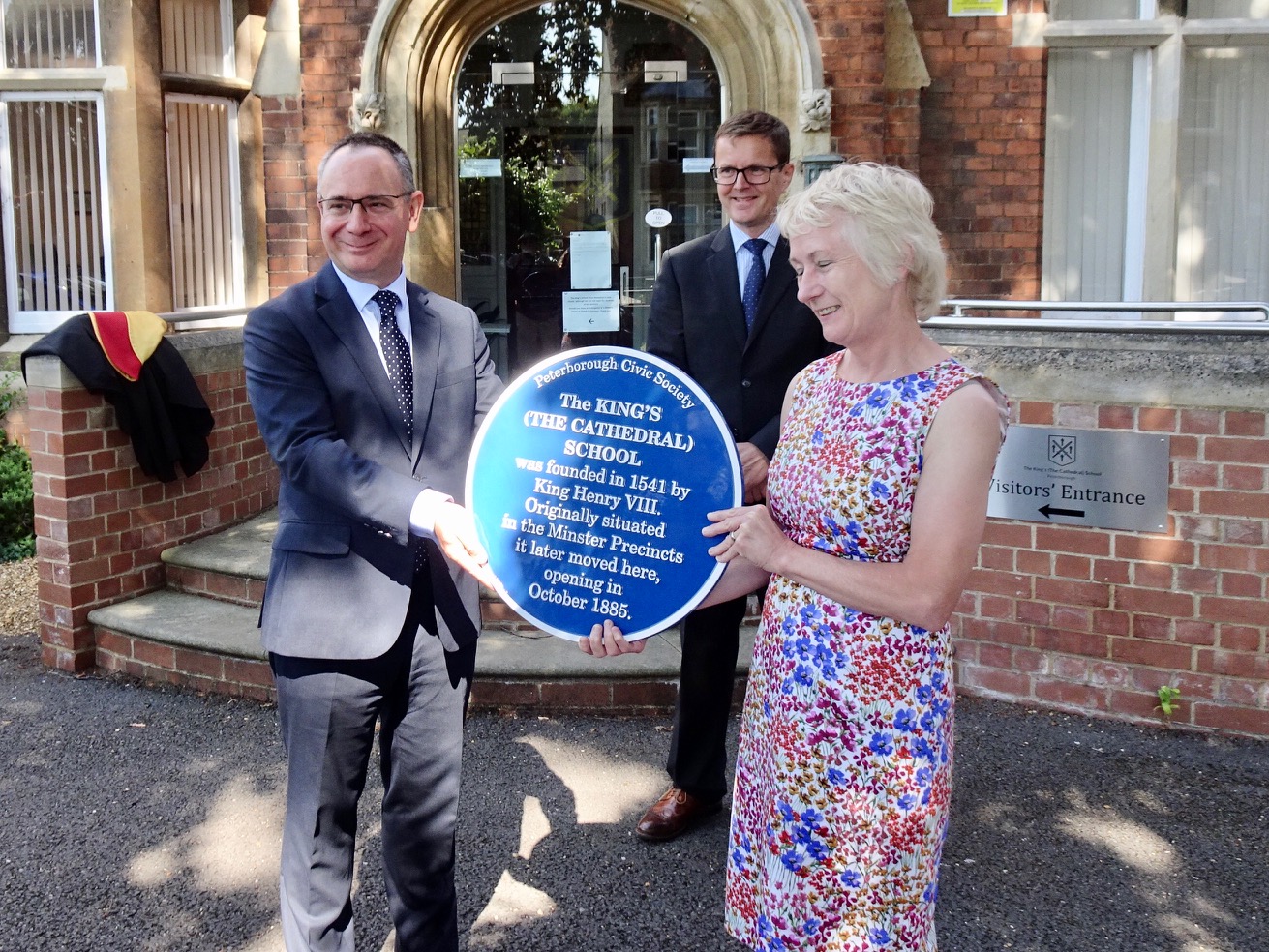 This plaque is one of a series of fifteen blue plaques recently installed in central Peterborough by Peterborough Civic Society (pictured right). The new series of plaques augments the twenty existing plaques in the city centre. Further details about all the plaques can be found in the accompanying 28-page booklet which can be ordered on the Society’s website at a price of £2.00 per copy (to cover postage and packing).  Once the Covid-19 lockdown restrictions are relaxed, copies of the booklet will be available to collect free of charge at the Town Hall and other outlets.  A download of the booklet is available on the Society’s website. The plaques project has been supported by the National Lottery Heritage Fund and Peterborough City Council.